World War I in Wacol

The theme for the National Trust Heritage Festival for 2015 is “Conflict and Compassion.” The tiny settlement of Wolston (now Wacol) on the fringe of Brisbane provides one example of the response of a small community to the Great War of 1914-1918.

Tom Moore Smith of Dingo Hill worked at the Asylum at Wolston, and two of his sons joined the 2nd Light Horse Field Ambulance, which was formed in Brisbane in September 1914. Percy enlisted in November and Monty in December. Both were then “rail porters,” and both gave their age as 21 – though both were in their early 30s. Percy served in Gallipoli, and returned to Australia in December 1917 (having nursing duties on board the ship). Monty served in the Sinai and Palestine: he was discharged as an invalid in December 1918. Both returned to work for the Railways.
Owen Smith, son of a second Smith family in Wolston, qualified as a nurse at the Asylum in 1914. In early 1916 he enlisted in the Australian Imperial Force at Sydney Town Hall. Owen served in France and Belgium with the 9th Field Ambulance. His military record shows that he returned to Australia in 1919 “on Escort Duty with Mental Cases.” He returned to live and work in Wolston.

“A Field Ambulance was a unit, not a vehicle. It was a mobile front line medical unit… composed of 10 officers and 224 men – and neither officers nor men carried weapons or ammunition.
As with all other units, the Field Ambulances relied heavily on horses for transport, and had an establishment of 14 riding and 52 draught and pack horses. They worked the 23 wagons, 3 water carts, 3 forage carts, 6 GS wagons, 10 ambulance wagons, and the cooks wagon. The Ambulance also had a single bicycle. Each unit also included 7 motor ambulances.
“…the Bearers convey the wounded to the dressing station (or Field Hospital, as the case may be). Those in the Tent Division dress the cases and perform nursing duties, while the Transport Division undertakes their conveyance to Base Hospital.”
http://www.diggerhistory.info 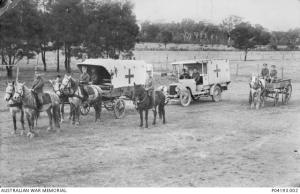 Comforts clubs were formed in local communities to provide, pack and send parcels of “comforts” to their soldiers in the battle zones eg knitted socks, gloves and balaclavas, donated handkerchiefs, soap and tinned food. These (mostly) women also raised funds to buy materials and extras such as mosquito nets, cigarettes, cocoa and writing materials for their boys (volunteers from a community often joined and fought together).
“The Wolston Comforts Club” was led by Mrs R D Lamb, whose husband was the band master at the Asylum. The patron of “Our Own Boys Comforts Club” in Goodna was Mrs Ellerton, whose husband was the Superintendent of the Asylum. (The Goodna club provided lunch for the “Dungarees” on their recruitment march in November 1915).

The Asylum provided the venue for much patriotic fundraising – coin evenings, dances and fetes such as that “for assisting disabled soldiers, opened by the governor” in the grounds in October 1918. The superintendent Dr Ellerton said then that “since the war broke out 42 returned men were engaged at the Asylum. A total of 30 returned men had been admitted as patients…”
The Ellertons, influential leaders in the local community, were also heavily involved in the erection of two Anzac cottages in Goodna. Mrs Ellerton, as president of the ladies group, opened the second Goodna cottage – the fourth such home for war widows in Queensland.

In 1917, the government surveyed 100 acres along Wacol Station Road for 12 poultry farms for returned soldiers. These were sold in the 1920s but were not successful. Most are now prison land.